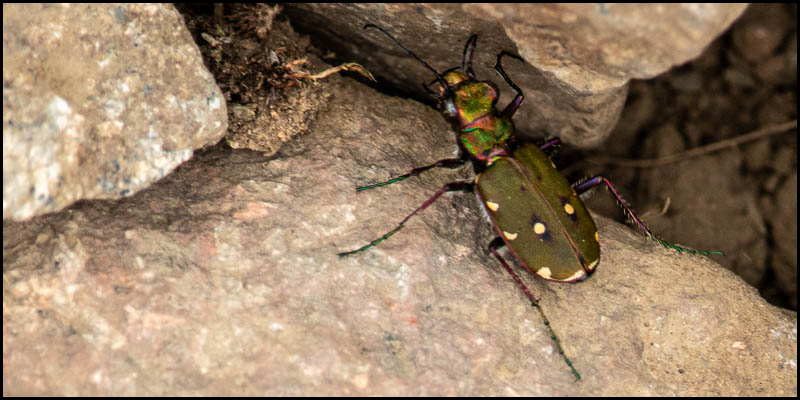 Tyger Tyger, burning bright,
In the forests of the night;
What immortal hand or eye,
Could frame thy fearful symmetry?

The above words form the first stanza of William Blake’s (1757-1827) iconic poem ‘The Tyger’. The poem has a speaker wondering about the immortal creator who has framed (created) such a fearful beast as a tiger, with its ‘dread hands’ and ‘dread feet’. However one might interpret the poem [Christian allegory; comparison of the two versions of God in the Bible (Old Testament ‘tiger’ v New Testament ‘lamb’)], it does point to how awesome certain animals appear to us.

While it’s clearly not a ‘fearful’ tiger, I did see this awesome creature on a walk along the Harthope Valley a couple of days ago. It’s a green tiger beetle (Cicindela campestris).

This iridescent green beetle is recognisable by the cream-coloured spots on its wing cases (elytra) and its purple-bronze legs covered in white hairs. Its antennae are comparatively long and straight. The adults (like the one shown above) are about 10-15mm in length.

The Wildlife Trusts describe a green tiger beetle as “a ferocious and agile predator.” Like Blake’s ‘tyger’, these beetles also have powerful jaws (mandibles) that they use to hunt spiders, ants and caterpillars. With long legs, its one of the fastest insects. It’s non-endangered and is common across Europe.

Green tiger beetles prefer relatively dry, sparsely vegetated areas such as dunes, brownfield sites and heathland (which is where I photographed this specimen – on the dry scree along the route towards the Carey Burn falls.