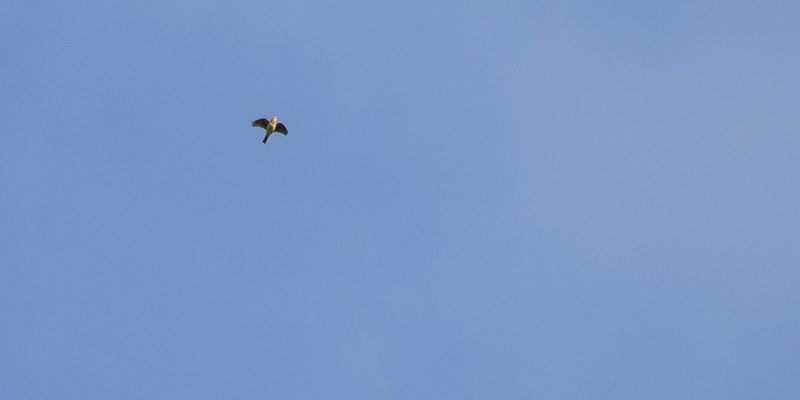 The lark ascending at Ingram

Cycling out to Ingram yesterday, in the fields between the ‘whirlpool‘ on the River Breamish and the Ingram bridge, I saw my first skylark of the season. It was performing its typical display flight, climbing almost vertically up into the sky, all the time singing its elaborate and highly-distinctive song. Just makes you feel that Spring is on its way!

Its melodious tune, and its extravagant display, has inspired poets and composers for generations. Perhaps the most well-known of the poets is the English poet George Meredith (1828-1909) who wrote his now famous ‘The Lark Ascending’ in 1881:

He rises and begins to round,
He drops the silver chain of sound
Of many links without a break,
In chirrup, whistle, slur and shake,
All intervolv’d and spreading wide,
Like water-dimples down a tide
Where ripple ripple overcurls
And eddy into eddy whirls…

It was this poem that inspired English composer Ralph Vaughn Williams (1872-1958) to write the now more famous musical piece of the same name in 1914:

Unfortunately, I didn’t have my long lens on my camera so I only have a few blurred images. But they do remind me that Spring is just around the corner. Ahhh!