On the Beech or ‘What a Lot of Big Words!’ 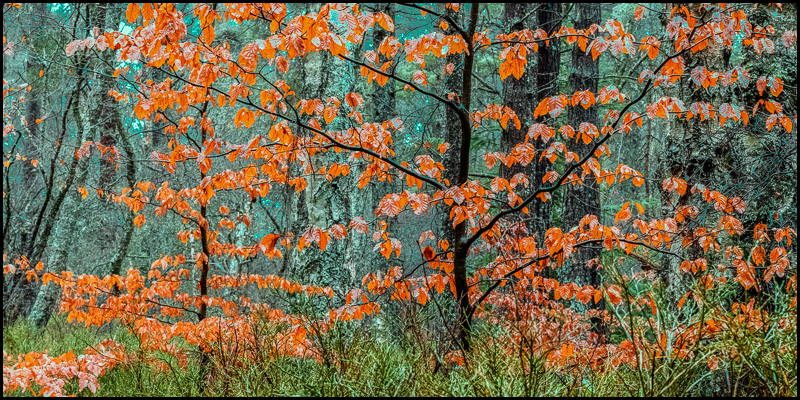 I have three favourite words. The second of these (in the order that I was introduced to them) came from studying A-level Biology at VI Form College when I was a teenager. I’m sure it’ll be on everyone’s Favourite List. It’s abscission. Yes, that one again! I know…it’s so yesterday, isn’t it?

It’s one of those words that is so specific it’s probably only said a couple of times a year – and then only by botanists trying to impress their other halves or by teenagers studying biology.

the separation or falling off of part of a plant

It’s obvious to us, especially living here in the northern hemisphere, that non-evergreen trees and shrubs lose their leaves in autumn. At the end of summer, the leaves have completed their job of photosynthesising sugars from sunlight to help the tree grow and, most importantly, to produce seeds/fruits for reproduction. The winter months (here in the northern hemisphere) are typified by low light, low temperatures, windy conditions, and so on: none of which is conducive to photosynthesis. So, the leaves are no longer needed. The cells between the base of each leaf and its stalk change character and form an abscission layer. This cork-like layer weakens the bond between the leaf and the stalk and prevents diseases entering the tree once the leaf has dropped off (a bit like a scab on our own body). And that’s abscission, folks!

It’s also apparent, though, that certain trees and shrubs don’t fully lose their leaves during the autumn – they wither but remain attached to the stem. This is known as marcescence (but that’s not on my list of favourite words). In so-called marcescent trees, the abscission layer is incomplete. Consequently, many of the shrivelled leaves hold onto their stalks until the spring (at which time they are dislodged by new leaf growth).

Holding onto leaves throughout the autumn and winter makes beech a great hedging plant. Woodland beech also make for great photographs. Their brown and copper-coloured leaves really stand out against the dark background of shady woodland. I also think they look at their best when wet. The photos on this page were taken a couple of days ago (28 January 2021) when I called in at Thrunton Wood as I was passing.

Maybe I’ll let you know my other two favourite words sometime. I wonder what they are?

I wonder what yours are?