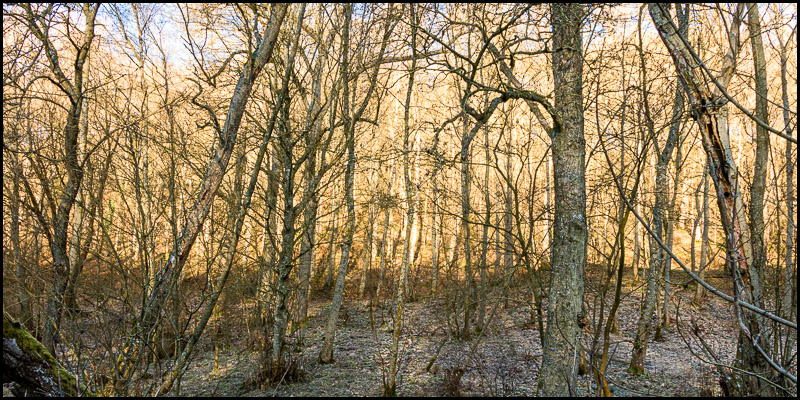 It’s taken a long time for the snow to leave the floor of Breamish Valley. We’ve had icy conditions since 3 January this year and snow on the Cheviots pretty much from the beginning of the New Year too. But, with the slight rise in temperature over the last couple of days, the snow has now more or less melted from the valley floor. However, some snow is still clinging to the backdrop of the Cheviot Hills.

I’ve mentioned previously how the quality of winter sunlight changes rapidly and that this, and the sun’s low position in the sky, can lead to creatively catching the sun in photos.

One quality of light that’s a firm favourite of landscape photographers is ‘golden light’. This is seen when the sun is low in the sky, such as at sunset. Being low in the sky, the sun’s light has to pass through more of Earth’s atmosphere before it reaches us. There are, therefore, more dust particles and water droplets available to scatter the light, making it ‘softer’. In addition, the thicker atmosphere tends to scatter blue/indigo/violet wavelengths, which means that more of the red/orange wavelengths reach us. So, in summer for example, the so-called ‘golden hour’ occurs about an hour before sunset. This is why the landscape photographers venture up the hills at this time: in order to get the soft, low contrast, long shadow photographs that are so appealing to us.

Of course, in winter the sun is low in the sky pretty much throughout the day. Winter can be, therefore, a good time to take ‘golden’ photographs. What tends to interfere, though, are all the other weather variables, such as increased cloud cover, rain, snow, etc. So, you’ve just got to take an opportunity when it arises.

A couple of days ago

One such ‘golden’ opportunity occurred a couple of days ago (24 January 2021). It added another dimension to my otherwise Groundhog Day, once-a-day lockdown exercise – along the winter Crawley Dene.