Mushrooms in the Valley 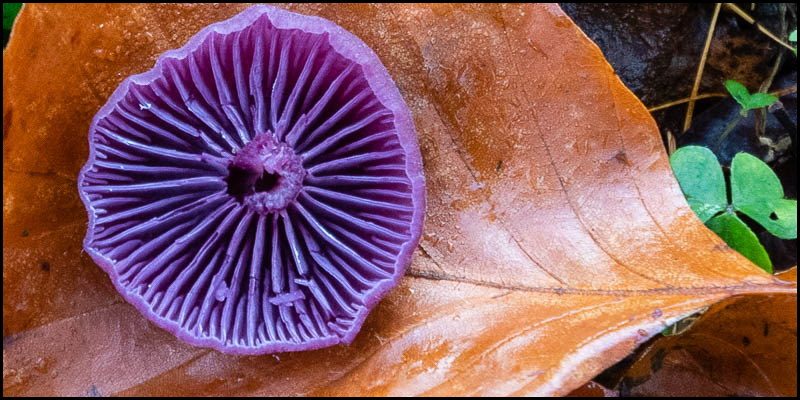 WARNING: Unless you are 100% confident that you know what you are doing, NEVER EAT mushrooms – many are poisonous or, if not poisonous, can cause severe upset stomachs, etc. Look but don’t eat!

You’ve probably played it before. It’s often along the lines of ’20 Questions’, in which someone thinks of an item, an object, a person, and so on. Others then have 20 attempts to ask questions in order to determine the chosen thing – but they can only ask questions that can be answered with either ‘yes’ or ‘no’. To narrow it down, early on someone will typically ask one of the three major category questions: ‘Is it an animal?’, ‘Is it a vegetable?’, ‘Is it a mineral?’ This seems to cover all the bases with regard to how we conceive of the world/universe – everything’s either an animal, a vegetable (presumably meaning a plant) or a mineral. This is fine for a parlour game but is everything actually an animal, a mineral or a plant?

Mushrooms are fungi. However, fungi are not plants. They actually belong to their own kingdom (group of life forms) that is different to plants. The main differences are that fungi are unable to photosynthesise (the process by which plants convert sunlight into usable sugars) and they also lack cellulose (that plants use to build their cell walls).

The part of a fungus that we typically recognise as a mushroom or toadstool, etc is actually it’s fruiting body – the part that produces and sheds spores so that it can reproduce. Most of a fungus is the mycelium – a complex network of fine thread-like filaments that spread, often unseen, through leaf litter, dead wood, soil, dead animals, etc.

Worldwide, it’s thought that there are over one million species of fungi (1). I don’t know how many species there may be living in the Breamish Valley and the immediate area (clearly not a million!) but there are still plenty to see throughout the year. And some are so very colourful:

The above scarlet waxcap was found all over the playing field at Powburn. It’s bright, scarlet colour makes it difficult to miss – but you’ll have to be quick, as it only lasts a day or two depending on the weather.

This beautiful amethyst-coloured mushroom was found in Thrunton Wood. This one’s a little harder to find, as the purple colours blend surprisingly well with surrounding leaf litter.

Everyone’s favourite – or at least the one most people recognise as a mushroom – the fairy mushroom fly agaric. Of course, red means danger – it’s poisonous!

This mushroom was found along Crawley Dene growing in a cluster on a dead broadleaf tree. It is typified by a velvety stalk and orange cap. Now, this one is edible but you should always cook it first. Again, though, heed the warning – unless you are 100% certain, never eat any mushroom!

The short section on ‘Fungi’ was adapted from information in Summers, R.W. (2018) ‘Abernethy Forest: The History and Ecology of an Old Scottish Pinewood’ RSPB, Scotland.

I could be wrong

I’m not an expert at identifying fungi – I’m just a beginning hobbyist. So, I may well be wrong about the identity of some of mushrooms shown here. If you think I’ve misidentified anything then please feel free to get in touch using the Contact Form and I’ll be pleased to update the information. Thanks!