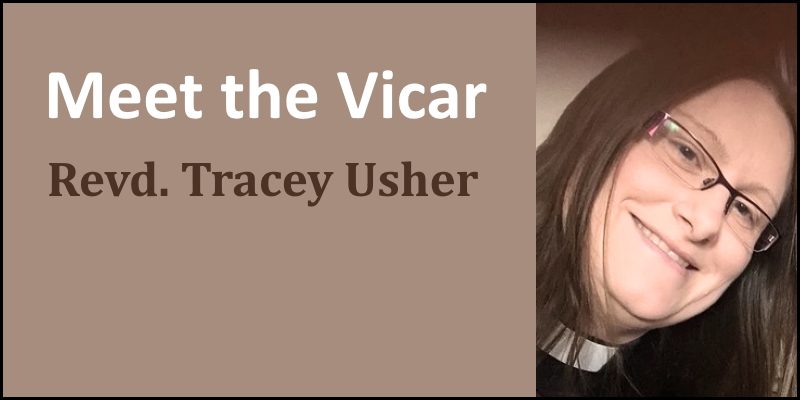 Following the retirement of Revd. Marion Penfold, the Benefice of Breamish and Till is now pleased to announce the appointment of a new vicar who, among other things, will be responsible for Ingram Church. We’re pleased to introduce Revd. Tracey Usher…in her own words.

[All text and images provided by Tracey Usher and used with permission.]

I was born and bred in the West End of Newcastle and lived so close to the city centre that I could open the front door on a match day and hear the crowds at St James’ Park. I love rock music, from all decades, but my favourite band are the Foo Fighters (don’t worry if you haven’t got a clue who they are!). I’ve seen them live twice and would love to see the again!

You will often see me wandering around with a four- legged friend, his name is Diesel, and I keep describing him as a ‘little pup, in a big dog’s body’. He is my faithful companion, although his snoring is a lot to be desired! My other four-legged friend lives in a tank. He’s a 16-year-old terrapin called Squirt, who is currently waited on hand and foot at my parent’s house.

Through the lockdown I took up a little hobby, having been unsuccessful at playing the guitar for the last 13 years (it makes a lovely ornament in the corner of a room!), I started playing the ukulele – I’ll apologise now for my terrible playing!

My Mum started taking me to the toddler group at St Peter’s, Cowgate, and from then we became regular worshippers and I worshipped there until I went to Theological College. I studied Business at Newcastle College and then Psychology at the University of Sunderland, with the intention of furthering my studies. But that was not God’s plan! Instead, I found myself going through the discernment process to ordination and moving to West Yorkshire to train at the College of The Resurrection, where the rhythm of prayer life and the nature of serving each other has created a strong foundation for my ministry.

I have felt so welcomed already!

I have served my curacy in two parts which has given me a wealth of knowledge and understanding in different contexts. I spent the first part of my curacy in the parish of St Gabriel, Heaton, in the East End of Newcastle, and the second half at Holy Trinity with St Mary’s, Berwick Upon Tweed. They were the complete opposite of each other in more ways than one, as well as being at completely different ends of the diocese! I really feel that God has called me to serve in such an unexpected and wonderful way, that even though it was not part of my original plan, I am privileged to be a part of it.

I have felt so welcomed already, and I look forward to seeing what the future holds for the Benefice of Breamish and Till as we start this journey together.