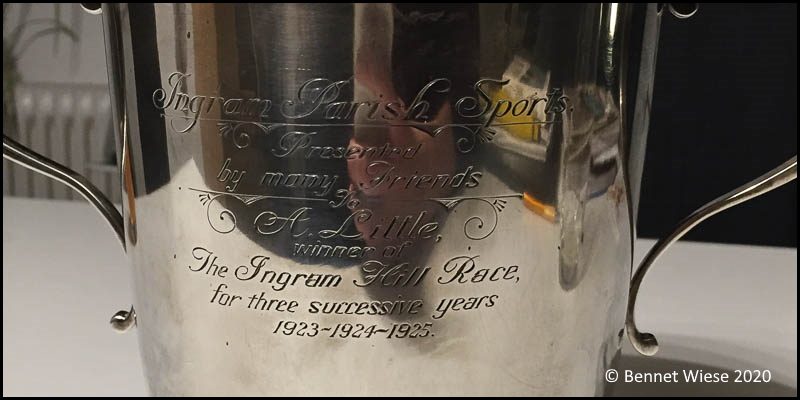 Bennet cleaned up the cup and has kindly sent some photos to share, also in the hope of finding out more about its origins.

The trophy bears a silver hallmark:

As far as I can work out from my research (I’m no expert, so please advise me if you think I’ve got this wrong), the hallmark reads as follows.

Lion passant (this certifies the 925/1000 (sterling) silver standard in London and other British Assay Offices, so it is always present on British Sterling Silver items).

In summary, the cup appears to be British sterling silver made by Reid and Sons of London in 1923. This appears to fit with the engraved dates of 1923-1924-1925, suggesting that the cup was made in 1923 and then bought in 1925 from a supplier who likely engraved it ready for presentation.

Do you have any information about the history of the Ingram Parish Sports Hill Race? We know that the annual Ingram Show and Sports began in 1909, as the Show celebrated its centenary in 2009.

If you can help, please use the Contact Form to get in touch or use the comments form below.