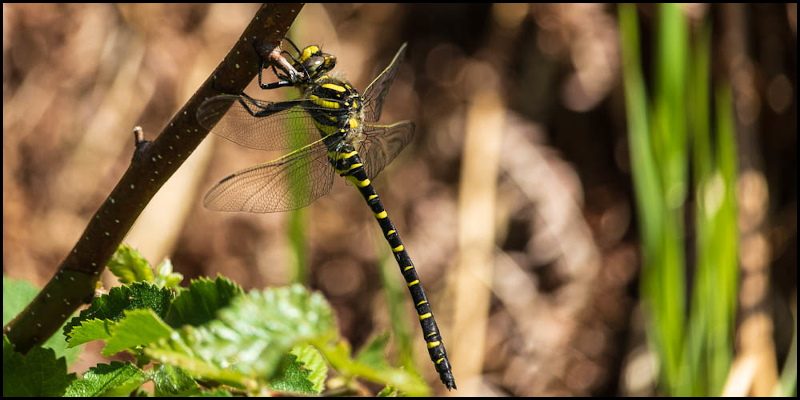 Not in Beanley Wood this time but in Hepburn Wood, a Forestry England managed forest just a few miles east of Lilburn Tower. Out exercising again – and so much to see at this time of the year.

Now, as I keep stressing, I’m not really a wildlife photographer – I don’t have the equipment to do it justice. However, I can’t help but be drawn to the wonderful variety of wildlife we have all around us here in north Northumberland. So, the temptation to snap an image of a passing butterfly, blue tit or bullfinch frequently gets the better of me. So, a couple of days ago at Hepburn Wood, I was rewarded by the sight of this wonderful golden-ringed dragonfly.

They are (perhaps not surprisingly) very difficult to spot when they are resting, especially in bright sunshine filtering it’s way through branches, twigs and leaves and creating deep chocolate shadows in the undergrowth. The golden rings along the insect’s abdomen, against its black body, camouflage it extremely well. So, it’s when the dragonfly takes to the wing that it’s easier to spot – but not, of course, easier to photograph, as it flits about, seemingly erratically. Don’t be fooled, though. Dragonflies are powerful flyers and hunt on the wing. They are carnivores that eat other insects, including midges, butterflies, moths and other dragonflies.

Anyway, when it landed, I managed to take a few quick snaps before it was up, away, and lost from view.

The golden-ringed dragonfly (Cordulegaster boltonii) is the largest dragonfly in the UK. The above image shows that my Hepburn Wood dragonfly was a male (about 74 mm long); having a slight club shape to its abdomen. Females are longer (about 84 mm), have a narrower abdomen, and a long ovipositer.

The golden-ringed dragonfly can be seen over mountain streams, at ponds, and frequently over heath land. The high escarpments, heath land, ponds and abundant insect life of Hepburn Wood seem to be an ideal location for this striking insect. What’s not to like?