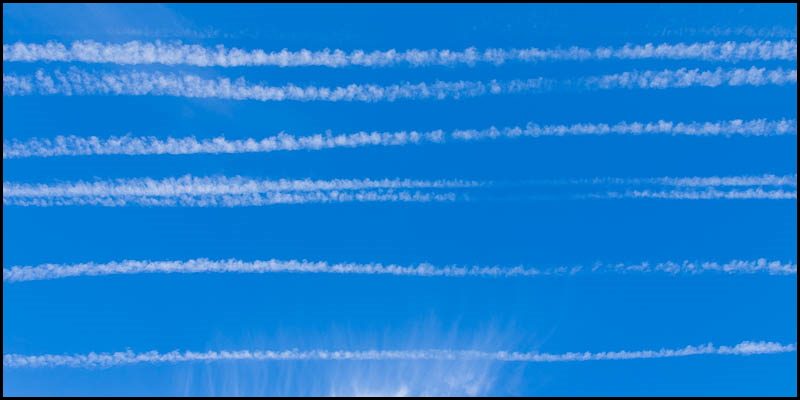 Contrails (a word blended from ‘condensation trails’) are the wispy, cloud-like white lines that zig-zag across the sky in the wake of jets engines. They are made up of water droplets and/or ice crystals.

During the current coronavirus pandemic many airline fleets have been grounded and, consequently, we have seen some beautifully clear skies. So, a couple of days ago (Friday 29 May 2020), when I happened to see seven contrails in the sky above Powburn from my garden, this was something unusual.

I hadn’t seen the jets that would have produced these contrails but, as the contrails were running in parallel so closely together, this suggested that they were made by military aircraft (commercial planes don’t fly so close or on this flight path). Of course, this wouldn’t be so unusual in this part of north Northumberland, as we commonly see RAF jets practising manoeuvres in the skies over the Cheviots and along the coast. Anyway, I was curious. So, a little investigating the following day brought me to Lindisfarne Mead’s Facebook page which had the following entry dated 30 May 2020):

There were some spectacular high-altitude contrails over Holy Island yesterday [29 May 2020], as two American refuelling tankers, a KC-10 (DC-10) and KC-135 (707) topped up 6 x F-15 Eagles. With the clear sky and calm conditions, it made an amazing sight and they are due back over this afternoon [30 May 2020], so you may get another chance to see it.

Well, again I didn’t manage to see the actual planes but I did see evidence of them having been back in the skies over north Northumberland. On my way back from exercising in Hepburn Wood yesterday, I saw these eight contrails in the beautifully clear skies above Beanley (not far from Beanley’s Wood).

If you’re curious to know what the planes would have looked like, here are some images gleaned from the Public Domain.