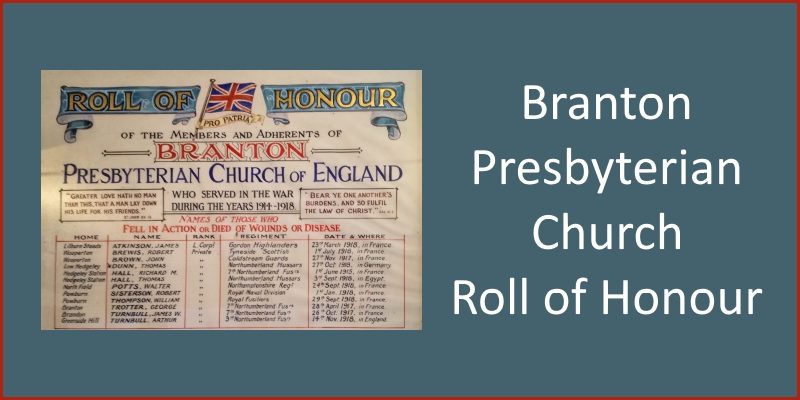 The image above shows the former Branton Presbyterian Church of England in the village of Branton, Northumberland UK. The building is now a residential home known as ‘Branton Church House’.

The Branton Presbyterian Church Roll of Honour is hand-written on paper and presented in a glazed, wall-mounted, wood frame.

The image above shows the Home, Name, Rank, Regiment and Date & Where they “fell in action or died of wounds or disease” during WWI of 12 servicemen who were “…members and adherents of Branton Presbyterian Church of England.”

/PRO PATRIA/ ROLL OF HONOUR/ OF THE MEMBERS AND ADHERENTS OF/ BRANTON /PRESBYTERIAN CHURCH OF ENGLAND/ WHO SERVED IN THE WAR /DURING THE YEARS 1914-1918./ NAMES OF THOSE WHO/ FELL IN ACTION OR DIED OF WOUNDS OR DISEASE/

Of the 12 servicemen listed as having died during WWI, the names of all 12 now appear on the Breamish Valley War Memorial, Powburn, Northumberland UK: