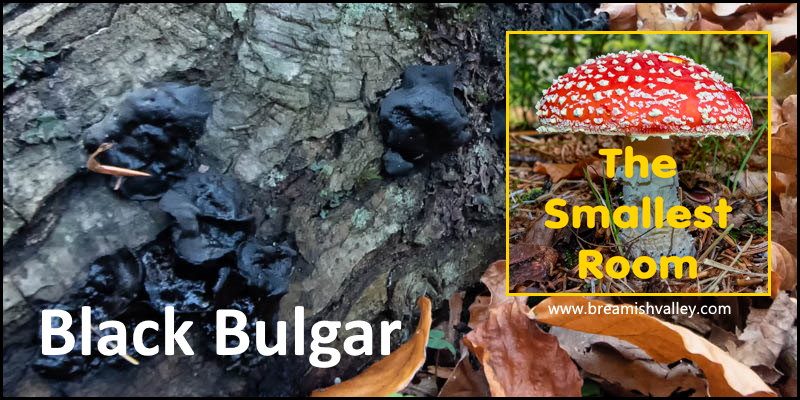 When to see: October-March (but can be found all year round)

A small, leathery cup-fungus commonly found in clusters on fallen branches/dead trees – particularly oak and beech. Some say they look like liquorice drops (1) or Pontefract cakes (2).

The species name ‘inquinans’ means polluting, defiling, befouling or staining (3) and gives the clue that the fungus can stain your hands if you handle/touch it.

Black bulgar doesn’t have much of a stem: it’s more like a short stub. The cap is anything from 0.5-4 cm across and somewhat rolled at the margins when the fungus is young – it flattens as the fungus matures. The top surface of the cap is the fertile surface from which the spores are released.

This fungus is inedible.

The black bulgar is common throughout the British Isles: I found the following examples in Thrunton Wood and Crawley Dene.

I could be wrong

I’m not an expert at identifying fungi – I’m just a hobbyist. So, I may well be wrong about the identity of mushrooms shown here. If you think I’ve misidentified anything then please feel free to get in touch using the Contact Form and I’ll be pleased to update the information. Thanks!

REMEMBER: Unless you are 100% confident that you know what you are doing, NEVER EAT wild mushrooms – many are poisonous and/or can cause severe illness. Look but don’t eat!