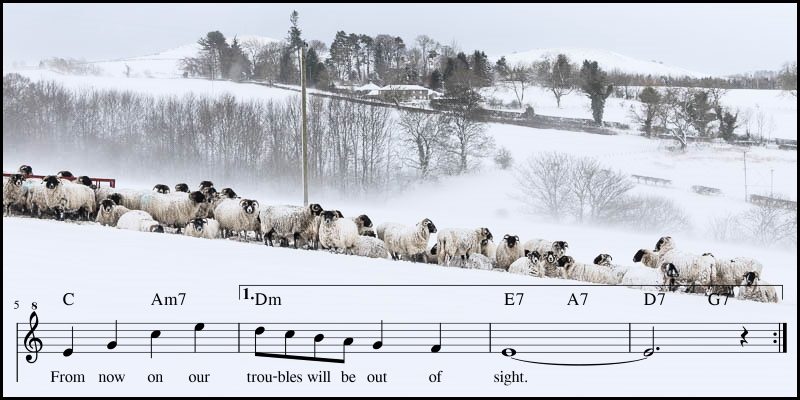 Have yourself a merry little Christmas

However you celebrate the Christmas season, songs and carols are such a staple. We hear them on the radio, as background music in shops, rousingly played by brass bands in our streets, and on the tinkling pianos and other instruments that our children and grandchildren are learning to play. And we would have enjoyed singing them as a local community around the Christmas tree such as Powburn’s Community Garden.

Of course, the coronavirus pandemic has put paid to many of these sorts of outside activities. Consequently, many of us have turned to online, streamed events instead. A couple of weeks ago, I enjoyed the Festival of Village Carols streamed live from the Sheffield area. And last night I enjoyed ‘Carols in the Bar’ live streamed from van Mildert College, University of Durham. There’s typically a mix of secular songs (e.g. Rockin’ Around the Christmas Tree; Jingle Bells; Feliz Navidad) and the more traditional carols (e.g. Silent Night; Once in Royal David’s City; O Holy Night). Some of the carols date back to the early 13th century and one of my favourites is ‘Gaudete’. I first became aware of this when I was a child, hearing the folk-rock band Steeleye Span perform it in Latin in 1973 (it got to No. 14 in the UK singles chart). It was first published in 1581 in a collection of Finnish sacred songs known as the in Piae Cantiones.

[Interestingly, I’m not aware that Advent 1 has a name other than Advent Sunday (the first Sunday of Advent) but Advent 3 (the third Sunday of Advent, that took place yesterday, is called ‘Gaudete’ (Latin for ‘Rejoice!).]

For me, this Gaudete and In The Bleak Midwinter are synonymous with the Christmas season.

Snow and the winter season

And, of course, snow is pretty much everyone’s ‘Christmas season trigger’ (although I suspect this is only/mostly true of people who live in the northern hemisphere). I’m a sucker for a bit of snowfall and, yes, I am hoping for a White Chrsitmas.

Do you remember the Beast from the East a couple of years ago? Lots of snow then! About a week ago, we did have a light covering of snow on the Cheviots but it quickly disappeared:

Have yourself a Merry Little Christmas: