A History of Crawley Tower 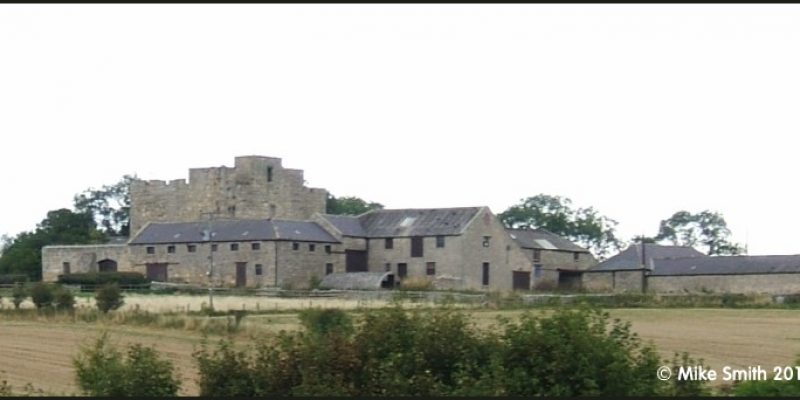 The ancient name of Crawley was Caer-law, or Crawlawe, signifying the ‘fortified hill’. Appropriately, the most significant historic landmark remaining today at Crawley is Crawley Tower, a scheduled monument and a grade 2* listed building, consisting of a medieval Pele tower surrounded by fortified buildings, which stand on top of a steep hill immediately to the East of Powburn, positioned with fine views of the Cheviot Hills and the length of the Breamish Valley.

The early history of the site of Crawley Tower remains uncertain. The tower stands at the SW corner of a square set of earthworks consisting of banks and ditches. These earthworks lead the antiquarian John Smart, writing in 1822, to name it as the site of the Roman camp Alauna amnis2, and Henry MacLauchlin, writing in 1852, regarded the earthworks as Roman3. However, these were simply the views of two antiquarians who were speculating about the history of the site, and the attribution as Alauna amnis has been discredited since it was based on an old manuscript (‘The Description of Britain’) that historians believe to have been faked by its discoverer Charles Bertram. It is also possible to suggest that, rather than being Roman, the earthworks were an outer bailey created for the fortified buildings that were built on the site in medieval times. Intriguingly though, whilst no explicit link to the Romans has been found, the ancient Britons usually distinguished the places where Roman camps had been by the name of Caer, that word signifying in their language a fortified place or castle1e.g. Carlisle, Cardiff, Caerleon. The word Law or Lawe comes from the Scots word for hill. Thus, the name Crawley itself, via the ancient name of Caer-law, may be suggestive of Roman activity having taken place on this site.

Crawley lies in the manor of Hedgeley. Early records show that Hedgeley was owned by King Henry I (1100-1135) and state that he granted the manor to a certain Hamo. The next Lord of the Manor was ‘Winnoc the hunter’, who was living circa 1106-1116. Before the end of Henry I’s reign, the manor was granted to Gospatric II of Edlingham (who later became the Earl of Dunbar). This grant again was confirmed by King Stephen in 1135, with the lordship also containing the manors of Beanley, Brandon, Branton, Harehope, Titlington, the three Middletons, Horsley, Roddam, Ritton, Stanton, Windygates, Long Witton and Nether Witton.

In about 1269 or soon after, Sir Walter of Edlingham granted Crawley to John the Clerk of Middleton. In 1312, Michael, son of John the Clerk of Middleton, sold Crawley to Sir Roger Heron of Ford. Crawley Tower became the seat of the Heron family. In 1343, Sir John Heron was granted a licence to erect a four-storey tower at Crawley4. A licence to crenellate was granted by Edward III to Sir John Heron “for his tower at Crawelawe” in November 13435. Occupation and later ownership passed to John Heron, an illegitimate son, in the late 1400s. Though the tower was ruinous by 1541, it continued in John Heron’s family until 1683, when Crawley was sold. It passed through several owners until 1780, when in the ownership of Sir Francis Blake of Fowberry Tower. It was later purchased by William Hargrave and added to his Shawdon estate. In 1931, Crawley Tower was sold with the rest of Crawley Farm to Captain J.C. Carr-Ellison of Hedgeley Hall, Northumberland. Crawley Tower remains in the ownership of the Carr-Ellison family to the present day. It can be viewed from the public road but is not open to the public.

Thanks to Noreen Birnie for supplying some of the source material for this article.